The small business owner and cryptocurrency

Do you feel like everyone is talking about Bitcoin and other cryptocurrencies these days? Some say it's the future, some say it's just a fad. Either way, it’s definitely growing in popularity and being used more and more. Bitcoin has actually been around for almost 10 years, but it’s never had as much buzz as it has right now. Beyond the increase in popularity, there’s also been an increase in the number of opportunities out there for individuals and businesses diving in and embracing this new technology.

Cryptocurrency is an online version of money. It is a digital asset. The first cryptocurrency created was Bitcoin, but there have since been over 1,500 different cryptocurrencies created. Each currency has its own purpose and each currency ranges widely in value. Factors such as the desirability, limited quantity, and usability of the coins help determine their value. Coins can be used like money to buy, sell, or invest; however, some cryptocurrencies have other abilities. Ethereum, for example, is able to make smart contracts or online applications. The limits of what users can do with cryptocurrency are still being defined.

Cryptocurrency differs in many ways from any other currency. The main difference? Cryptocurrencies are decentralized, meaning they aren’t backed by governments, banks, or any other central authority. Cryptocurrencies aren’t controlled by governments or third parties because they use blockchain technology. In short, blockchains are digital databases made up of blocks, and blocks are made up of transactions. Transactions are recorded on public ledgers and cryptocurrency uses cryptography to secure transactions, which means every transaction involves two public keys and the sender’s private key.

If an individual wants to send a digital coin to another individual, the transaction is confirmed by miners. A group of transactions that have all been confirmed by miners are called blocks. Miners receive rewards for confirming transactions and by solving very complicated math problems using advance computers. This process is called hashing. This peer-to-peer technology makes it possible to transfer assets between two individuals without having a central authority.

After receivers receive their digital coins, they can store their coins in digital wallets, and from there they can either hold the coins, sell them, trade them for other coins, invest them, use them to purchase goods and services, etc.

Cryptocurrency made its big debut in 2009, when a programmer that uses the pseudonym Satoshi Nakamoto introduced Bitcoin to the world. There had been previous attempts at creating digital currencies, but none of them stuck. The Bitcoin software allowed individuals to obtain Bitcoins through mining, so the number of Bitcoins grew and grew. The price of Bitcoin fluctuated anywhere between $1 and $1,000 from its conception until 2016, then in 2017, it really took off and the value increased exponentially. And not only did Bitcoin take off, so did many other cryptocurrencies. At the beginning of 2017, Bitcoin held 80 percent of the market share in cryptocurrency, but as of May 15, 2018, it only holds 37 percent of the market share. Other popular coins include Ethereum, Ripple, Bitcoin Cash, EOS, Litecoin, etc.

Cryptocurrency and the small business owner

There are pros and cons to using cryptocurrency in your business. Many business owners are attracted to cryptocurrency because of the easy and smooth transferring process. Since there are no banks or other authorities involved, you can transfer funds at any time of day to anywhere in the world almost instantaneously. Additionally, the fees to transfer funds are generally less than credit card, foreign currency, or other transaction fees assessed by banks and other financial institutions. Using cryptocurrency in your business removes the restrictions and inconveniences that multiple currencies and time zones can cause.

Another feature of cryptocurrency that can be both a blessing and a curse is that transactions are irreversible after they’ve been confirmed by miners. This is good for business owners because you don’t have to worry about bounced checks or fraud. On the other hand, this feature has caused many individuals to lose their cryptocurrency because if you accidentally send your coins to the wrong wallet address, there’s no way to get them back. There are also many incidents of individuals getting scammed or holding their coins on exchanges that run away with their money or get closed down, so make sure you do your research before diving in. For customers who value privacy, cryptocurrency can give you a great competitive advantage.

Besides using cryptocurrency as a medium of exchange, many individuals are also looking to cryptocurrency as an investment. In 2017, the value of cryptocurrencies increased by an average of 900 percent and outperformed essentially every asset class. Values were increasing exponentially, but they also fell as quickly, or in most cases, quicker than they climbed. In early 2018, Bitcoin alone had fallen more than 70 percent, going from being worth almost $20,000 in December to being worth less than $7,000 in April. Like any other volatile market, cryptocurrency has seen many investors that have quickly become millionaires, but also many investors that have lost a substantial amount of money on the crypto market, so make sure you understand the risks if you decide to incorporate cryptocurrency into your business.

In 2014, the IRS issued Notice 2014-21, which states that cryptocurrency is to be treated as property. In the eyes of the IRS, cryptocurrencies are not to be treated how other currencies are treated from a tax perspective, but instead are to be taxed as capital assets. In order to calculate capital gains and losses on your cryptocurrency, you must first understand which actions are considered taxable events, and in turn trigger tax obligations.

You create a taxable event if you sell your cryptocurrency for fiat, if you trade one coin for another coin, or if you use your cryptocurrency to purchase goods or services. The value of the capital gain or loss is determined by subtracting your cost basis in your coins in USD from the value of the coin in USD on the day that you sell, trade, or use it. If you hold the coins for one year before triggering a taxable event, your capital gain or loss becomes a long-term capital gain or loss. Coins held for less than a year create short-term capital gains and losses. This is important to note because long-term capital gains are taxed at preferential tax rates, 15 percent in most cases, whereas short-term capital gains are taxed at the taxpayer’s ordinary income tax rate. When taxpayers are able to manage their sales and wait one year before selling, trading, or using their coins, they may pay more than half as much tax as they would have had they sold, traded, or used their coins earlier.

If you accept cryptocurrency as a form of payment in your business, you are not immediately subject to capital gains and losses, but you are required to report the fair market value of the coin in USD on the day that you receive it as ordinary income. The income that you recognize at the time that you receive the coins then becomes your basis in the coin. This means that if you hold onto your coins and then choose to sell, trade, or use them at a later date, you’ll be subject to capital gains or losses.

Cryptocurrency has been one of the talking points of 2018 so many people and small businesses are intrigued by what this new technology could mean for them. Avalara helps educate small businesses with the resources and tax solutions they need. Join us on September 4 to learn more about sales tax compliance from Avalara’s Vice President of U.S. Tax Policy and Government Relations, Scott Peterson. 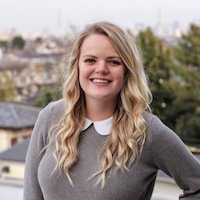 Avalara Author Laura Walter
Laura Walter is a CPA who specializes in cryptocurrency and assisted us with this article. If you need any help with your taxes or have questions about how you can integrate cryptocurrency into your business, feel free to reach out to Laura. Her email is cryptotaxgirl@gmail.com and she can be found on Twitter @CryptoTaxGirl.
Let's chat
I'm interested in learning more about Avalara solutions.
Chat with a sales tax specialist
I am an Avalara customer and want to chat about my products and services.
Chat with Support

×
Have a question? Chat with a sales tax specialist and get answers right now.